Mrs T Kennan, Waterside Place, Cumnock, has received notice from the War Office of the death of her husband, Private Tom Kennan, 2nd Battalion King’s Own Scottish Borderers. The death took place at the fight for Hill 60 on the 18th April. Private Kennan served several years with the colours, in the course of which he was in the campaign in India during the years 1895-98. He held a medal with 3 bars for the engagements he then took part in. His terms of service, as well as his service period, were over, but on the outbreak of war he volunteered for his old regiment.


He had previously served 1895-7 on the North West Front.

This obituary states that he was the 4th Cumnock man to die.  Little did they know at the time that things would get much worse.

He was born in Terregles, Kirkcudbrightshire on 20th June 1874 and his wife was Elizabeth Kennan, of 19, Wallace St, Dumfries (by the time the war grave was set up).  She was the eldest daughter of Mr Short of Wallace Street according to the D & G Standard so presumably she went back to her parents.  He died on 18th April 1915.

He is remembered on the Menin Gate Memorial at Ypres in Belgium and on the Cumnock War Memorial where his name is recorded as Keenan.  Everywhere else it is Kennan. 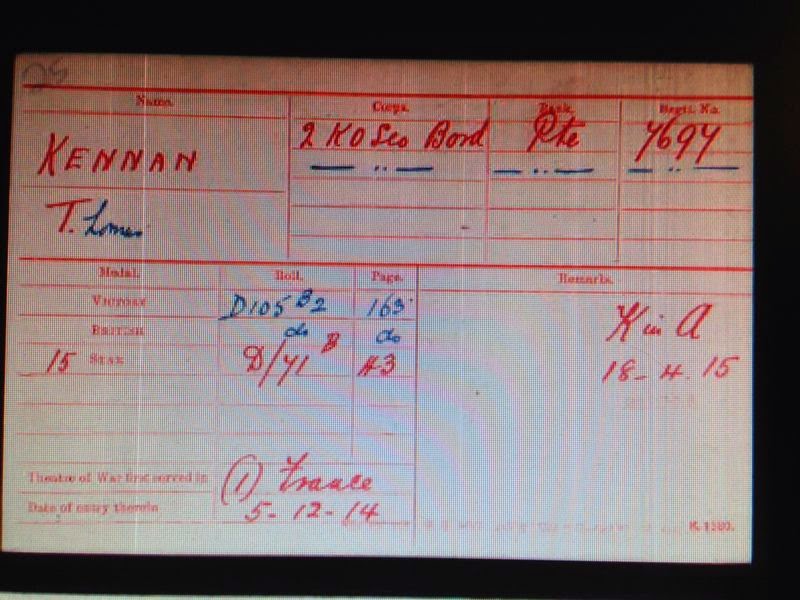 His entry on the Commonwealth War Graves Commission
Posted by Kay McMeekin at 07:42