I found this In Memoriam while searching "Cumnock" in newpapers online.

George Haig was a shoeing smith or farrier with Lanarkshire Yeomanry. His family were from Lanarkshire but were in Lugar at the time of the war. George had been in the Balkans for three weeks when he died on 9th November 1915. He was 21. The hospital ship Delta was used for men injured in Gallipoli.

George was born on 4th January 1894 in Abington, Lanarkshire to John Haig and Margaret Dempster  who were both from Carluke.  Margaret's sister Kate is the Mrs Adam in the In Memoriam notice above. She married George Adam in 1893.


George is remembered on Carluke War Memorial and the Helles Memorial.

Cumnock Connections tree
Posted by Kay McMeekin at 12:02 No comments:

The War Memorial in Lugar is most unusual in that it lists all those who served as well as those who perished.

Posted by Kay McMeekin at 08:22 No comments:

Email ThisBlogThis!Share to TwitterShare to FacebookShare to Pinterest
Labels: Lugar

He was a joiner aged 22 of Douglastone Cottage on the16th February 1915 at Cumnock. His next of kin was his father James. He was 5ft 7.
His father signed for his 1914-5 star on the 11th August 1919. His father listed his living relatives on 24th May 1919. His mother, brothers David, William, James & George and sisters Agnes and Catherine. All were living at Douglaston Cottage except David of 15 Alexandra St Clydebank and  Catherine of Station Cottage Dunure.

Posted by Kay McMeekin at 16:56 No comments:

A Cumnock born man died early in the war according to this report from the Dundee Evening Telegraph of January 1915. 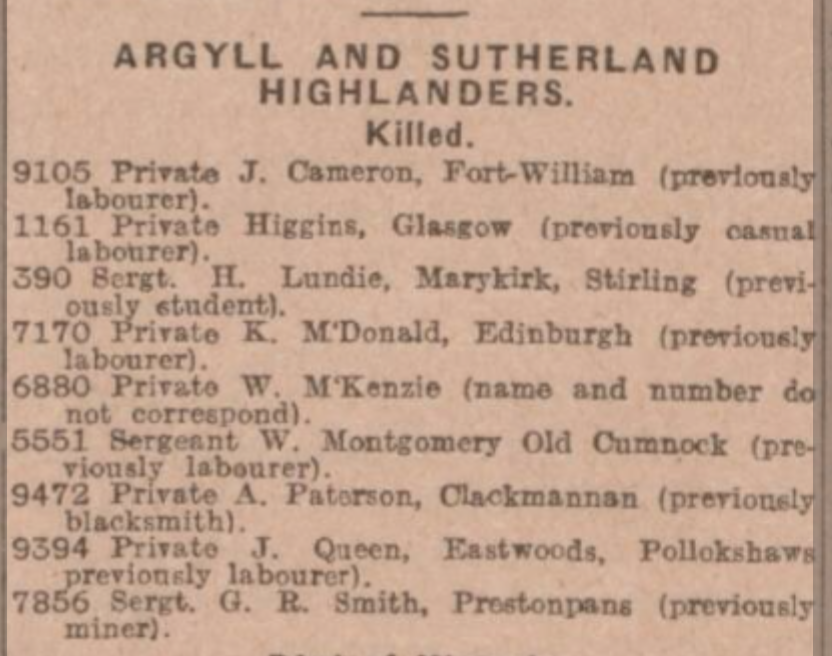 His service record survives
He joined the army at Glasgow on the 24th October 1895 aged 19. He was a labourer born in Old Cumnock.
The address on his service record was  87 Beechwood Cottages, Uphall Station, Linlithgowshire but I think this is a later address of his widow when she remarried.
He had a wife Annie Ross of Uphall Station and a daughter Margaret Angus Montgomery born 6th May 1914.
He had a brother Fergus of Hartlepool, a brother Robert in Saskatchewan Canada and a sister Maggie also in Saskatchewan. No parents recorded, so deceased.

Having a brother with the uncommon first name of Fergus helped me locate the family in the censuses.

His parents were William Montgomery,flesher (butcher) and Mary McBain and he was  born in Lugar on 6 Oct 1878.

His widow's address was later given as 5 O'Connell St, Hawick. She was Annie Jessie Angus Graham and she was remarried to Bryce Ross in 1917. 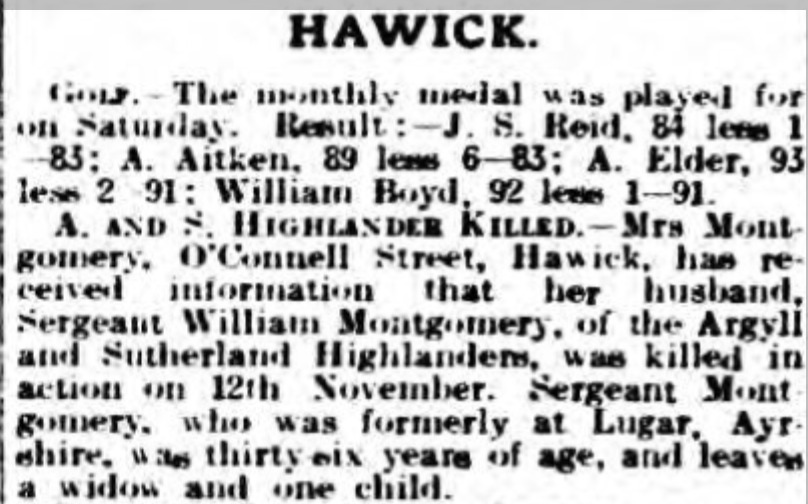 He was killed in action on 12 November 1914 and is remembered on the Ploegsteert Memorial in Belgium. He is not on Cumnock or Lugar War Memorials. He's on Hawick  War Memorial.

Posted by Kay McMeekin at 20:12 No comments:

Not at all sure about this man on Cumnock War Memorial, but he is the only William Stewart of the RSF in Ayrshire who died that I can find.

There was a William Stewart of Skares mentioned as home on convalescent leave but that was in 1918. He survived the war and married. He died in Whitehall pit in 1945. 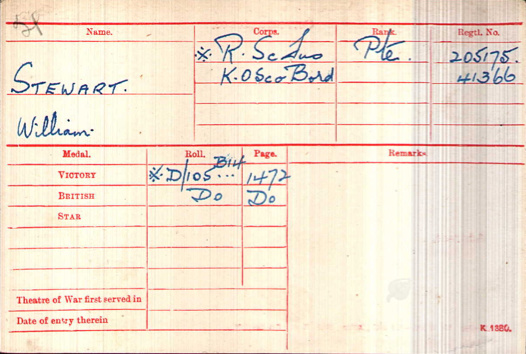 Could be the son of Robert Stewart and Mary Hillhouse b 1880 Dalmellington.
Posted by Kay McMeekin at 08:58 No comments:

In Flanders Fields by John McCrae

In Flanders fields the poppies blow
Between the crosses, row on row,
That mark our place; and in the sky
The larks, still bravely singing, fly
Scarce heard amid the guns below.

We are the Dead. Short days ago
We lived, felt dawn, saw sunset glow,
Loved and were loved, and now we lie
In Flanders fields.

Take up our quarrel with the foe:
To you from failing hands we throw
The torch; be yours to hold it high.
If ye break faith with us who die
We shall not sleep, though poppies grow
In Flanders fields. 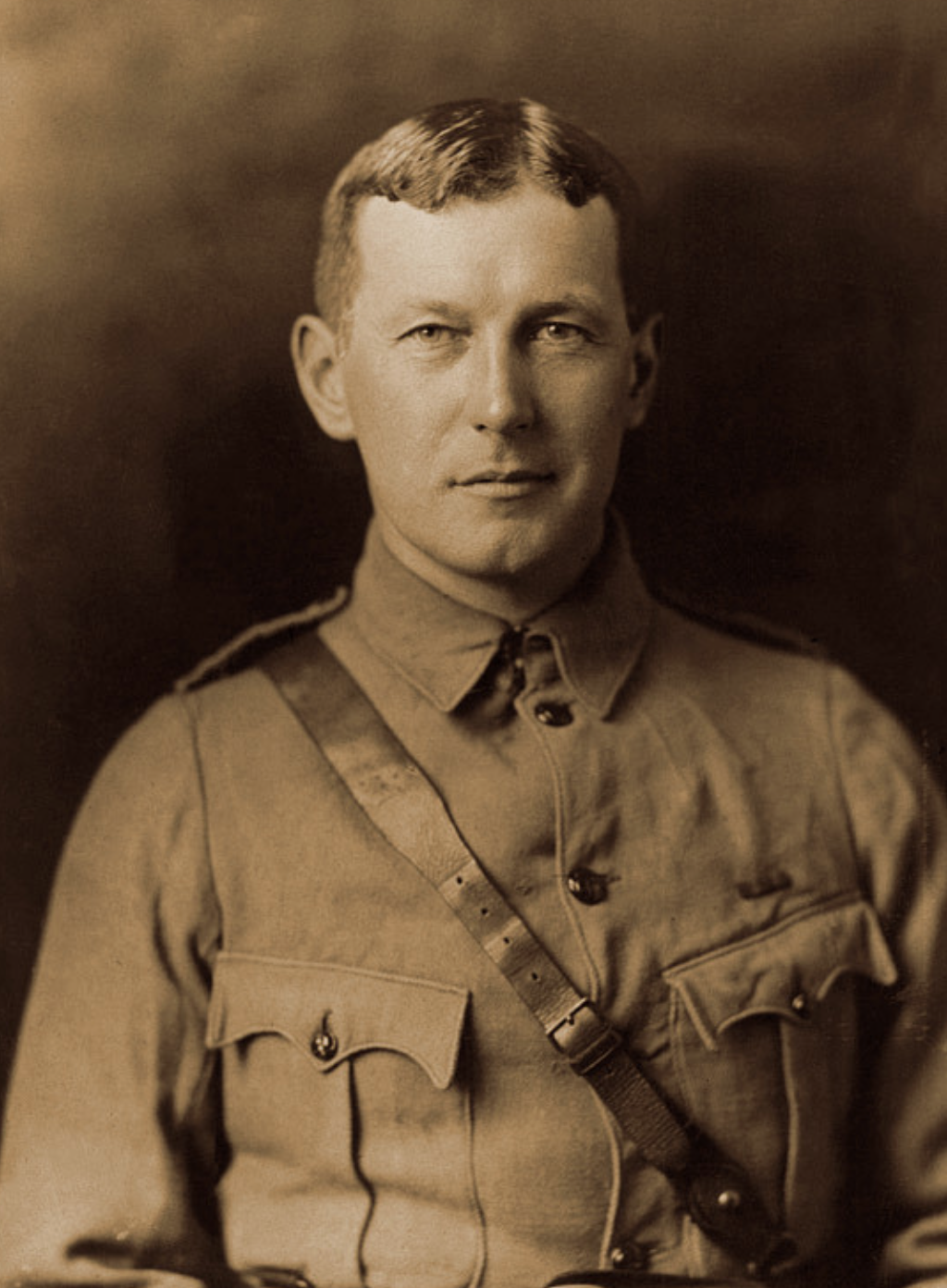