William Patrick was born at 119 Peesweep, Lugar on the 5th September 1885 to Irish born Adam Patrick a furnace filler and his wife Janet Currie. He was baptised in Lugar Church on 1st November 1885 by the Rev. Walker Milne. 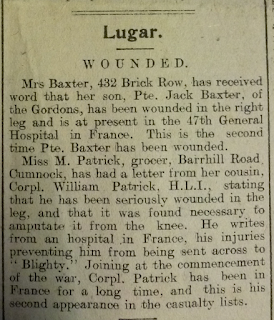 Cumnock Connections tree
Posted by Kay McMeekin at 17:31 No comments: