The son of the 3rd Marquis of Bute,  Lord Ninian was born on the 15th May 1883 at Dumfries House, Cumnock.

He volunteered for foreign service on the outbreak of war along with the whole regiment. He fell at the Hohenzollern Redoubt at the Battle of Loos on 2nd October 1915.

He and his wife had four children.

He stood for parliament for Cardiff boroughs in 1910, losing on that occasion but was elected to the same seat in the General Election of 1911.

He is not on Cumnock War Memorial. His name is inscribed along with 21 other MPs on the Parliamentary War Memorial known as the Recording Angel Memorial in Westminster Hall and a statue of him was erected in Cathays Park in Cardiff. 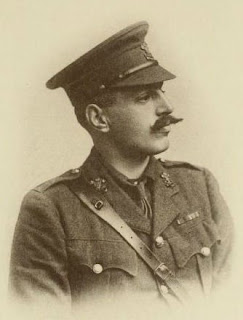 Updated 18 January 2020 with information kindly supplied by his granddaughter Marietta Crichton Stuart.
Posted by Kay McMeekin at 10:44 No comments:

William Surgeoner was a baker, born in Ayr and aged 24 when he enlisted on 8th September 1914  in the Cameron Highlanders.

He worked as a baker in the store at Lugar.

His service record survives. He was 5 ft 5 in tall and brown eyes and light brown hair.

His sister Annie McFedries of 137 George St, Ayr was his next of kin and received his medals.  She was 16 years older and brought him up after his mother died.  (Her husband, William McFedries, turns out to be a second cousin once removed of my husband!)

He is on Lugar War Memorial.