John was a rifleman with the New Zealand Rifle Brigade and died at the Somme on 29 March 1918. He was 25.He is buried at Euston Road Cemetery in Colincamps

His father died suddenly a few months later on 17th June 1918 aged 58 and is buried at Quarry Hills Cemetery.

John Burns was born in Cronberry about 1899,  the son of Peter Burns and Susan Kilday.

Here he is on the tree

The family lived at 260 Cronberry, second row. His father was a coal miner.
His parents were in Cambuslang by 1911


CWGC has this on him.

Posted by Kay McMeekin at 13:42 No comments:

John Pollock was born about 1895 in Sanquhar. His parents Thomas Pollock and Mary Kirkhope had the Queensberry Hotel there at the time but by 1901 they were in Cumnock at the Burns Inn/ Bucks Head.

His story is brought to us by the Dumfries & Galloway Standard. Thanks to Rhonda for finding it.


Lieutenant John Pollock, a prisoner for 9 months in Germany, is expected home today (11 January). He left a leg in Germany.

And he took part in a concert at Cumnock picture house in June 1918 for Red Cross Week.

Posted by Kay McMeekin at 10:00 No comments:

Robert Miller was born on the 23rd July 1879 in Cumnock the son of David Miller a coal miner and Agnes Kyle.

He is mentioned in the Cumnock Chronicle Roll of Honour in 1916 as with the Canadians, so he was easy to find.

His Canadian papers can be see here

He enlisted on the 5th September 1914 at Valcartier. He was single 34 years old,  a labourer and his next of kin was his mother Agnes living in Ayr.

In the 1901 census  he is a spirit salesman in Rutherglen, Glasgow.

He appears to have survived the war.

on the tree
Posted by Kay McMeekin at 08:20 No comments:

John Pyle appears in the Cumnock Chronicle list of men serving in WW1. He is an engineer on board HMS Anne, a seaplane carrier.

John was born on 7 February 1891 in Dumfries the son of a tailor William Lockerbie Pyle and Carolina Boggie Wilson.

The family was in Cumnock by 1899 when sister Robina was born.

In the 1901 census they are in Townhead Street and father William is a tailor's cutter.
William Pyle 32
Caroline Pyle 31
John Pyle 10
Caroline Pyle 8
Robina Pyle 1

In the 1911 census they are in 4 Waterside Place and John is an engineer, mechanical
There are two nieces living with them Mary 8 and Elizabeth Pyle 2 born in Dumfries. 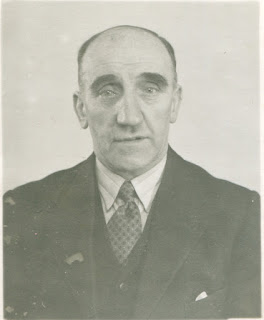 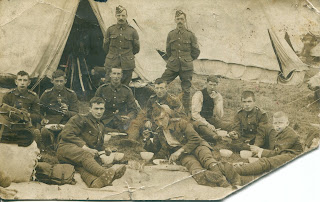 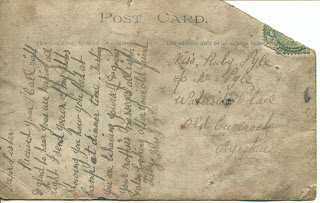 Posted by Kay McMeekin at 10:54 No comments:

David Kelly, the son of Richard Kelly and Martha McFarlane enlisted in the Royal Garrison Artillery at Ayr on 10 Apr 1918. His service record survives and provides much information.

He was a coal miner aged 19 years and 241 days and his next of kin was his mother Mrs Richard Kelly, 140 Skares.

He was invalided out on 18th June 1918 at Newhaven because of shortness of breath and inability to walk far.

It also states "he is sufficiently robust to earn a normal day's wage in the employment he is going to take up".

His older brothers James and William both died within weeks of each other in the 1918 flu epidemic.

David married neighbour Sadie Thorburn in 1925.  In the 1930 valuation roll he is a collier at 128 Skares Row. They lived latterly in Mauchline.

Brother Charles Kelly was in the HLI and also discharged as unfit on the 29th August 1918. He was a spirit salesman, of good character, sober, honest and diligent.

Cumnock Connections tree
Posted by Kay McMeekin at 13:30 No comments:

Henry Charles Carruthers was a 34 year old grocer living with his wife Janet or Jessie McSorland and 3 children at 368 Cronberry when he enlisted in 1917.

He was in the RGA and was a gunner, stationed at Falmouth and Plymouth.

On demobilisation his address was 29 Glengyron Row and he was still at that address in 1930 (valuation roll). By then he was a labourer.

He was born in Dalbeattie about 1882. His parents were Hugh Carruthers a ploughman and Henrietta Jane Russell.

Here he is on Cumnock Connections tree

Posted by Kay McMeekin at 19:52 No comments:

He was born Alfred McCririck in  but later records have him as Frederick. His parents were William McCririck and Jane Younie.

According to his service papers :-


He married Annie Morrison McKenzie in Muirkirk in 1913.  He later worked as an engine fitter in Glasgow.

He is the brother of Thomas McCririck

Cumnock Connections tree
Posted by Kay McMeekin at 12:53 No comments:

Thomas McCririck survived the war but died young nevertheless in 1920.

He was born on 18th March  1877 at Garallan Smithy of a long line of blacksmiths working there. His parents were William McCririck and Jane Younie.  He was a bright lad though and went to Glasgow University.

In the 1911 census he was working as a doctor in Wandsworth Hospital, London. He married Isabella Morrison in 1912 in Glasgow.  Things were going well for him until the advent of war.

Thomas was born 18 March 1877 in Old Cumnock and he was a very high achieving student at the University, gaining a number of prizes and having a particular gift for Botany and Zoology.
In 1901 he gained the Herbarium Prize and a Second Class certificate for Botany with ‘Special Commendation of Excellence of Specimens’. The entry records that: “Mr McCririck’s Herbarium contained 471 specimens correctly named.”

Thomas McCririck then gained an MD 1911 with a thesis titled: The streptococco-opsonic index in scarlatina, erysipelas and puerperal fever.

During WW1 Thomas McCririck served in the Royal Army Medical Corps as Temp Lieutenant in 1915 and Temp Captain in 1916 and 1918. McCririck was awarded the British Medal, the Victory Medal and the IS Star for his services during the War.

Thomas McCririck died in 1920, believed drowned and perhaps as a result of living with shell shock.

The implication is he drowned himself. 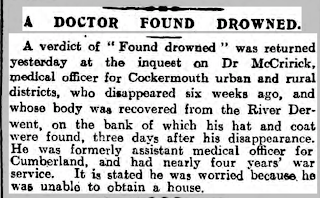 This is his probate. 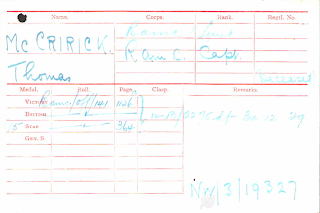 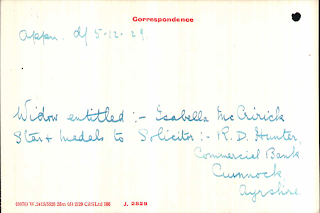 Thomas on our family tree

With thanks to Rhonda Queen for research.
Posted by Kay McMeekin at 11:42 No comments: