John Hamilton of  New Cumnock was born in Cumnock. His mother was Jane Hamilton and he was brought up by his grandparents John and Maggie Hamilton. 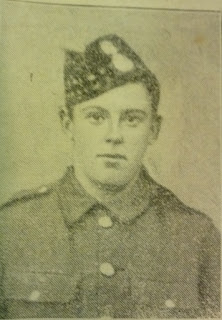 After an anxious wait of many months, hoping against hope that all would be well, the sad news arrived last week that all hope had been abandoned of Private John Hamilton, R.S.F., and that it was now presumed that he was dead. Pte Hamilton was one of the lads who took part in the great attack of the 30th July 1916 and who never returned. At the time he was posted as wounded and missing, but it was hoped that he was a prisoner, as many of his comrades who were similarly posted were afterwards found to be prisoners. All enquiries failed to trace him, and the official notice just received has put an end to any hopes still lingering amongst those he left behind. Pte Hamilton, when only 17 years of age, enlisted a year after the outbreak of hostilities, and three months later he was sent to France. There he took his place in the fighting line until he fell, as stated, on the 30th July last year. He was never home from the day he sailed. Pte Hamilton was brought up by his grandparents, Mr and Mrs John Hamilton, Burnfoot Rows, two much respected residenters, and worked with his uncles at New Cumnock Collieries. He was a likeable lad and was held in general respect. Although not a player himself, he was a keen follower of football and regularly accompanied his uncle Tom, the well known Kilmarnock F.C. full back, to the games. As a carpet bowler he held several prizes won in local competitions. Much sympathy is extended to Mr and Mrs Hamilton and other relatives, all of whom were specially attached to the deceased.

His service papers survive. He enlisted on 24 Aug 1915, stating his age as 19 yrs and 4 months (which seems to tally with the 1901 census).  He was a miner of 155 Burnfoot, New Cumnock.
His grandparents are named as his relatives along with uncle Alex 32, Robert 28 and Thomas 26. The grandmother provided this information after his death.

He is remembered on the Thiepval Memorial in the Somme, France and on Cumnock War Memorial