Cumnock Connections tree
Posted by Kay McMeekin at 17:16 No comments:

James Rollie was born in Taiglum, Stair on 18th June 1886 to John Rollie, coal miner and his wife Emily Ann Hancock.  Her second husband was James Souter McMurdo (making him a step cousin of another fallen soldier, William McMurdo. In the 1911 census the 2 McMurdo families are living 3 doors apart in Commondyke.

Curiously, James  appears to have enlisted in the Northumberland Fusiliers in Blackburn, Lancashire under the name of Gibson. I cannot locate his birth certificate under either name in New Cumnock, Ochiltree or Coylton parishes so this is rather unusual.

Served as GIBSON, son of the late Emily Hancock McMurdo (formerly Rollie) and James McMurdo (stepfather), of 167, Commondyke, Auchinleck, Ayrshire.  (Emily Hancock is related to me distantly by marriage.)

James does not appear on any of the local War Memorials either as Rollie or Gibson.

His medal card indicates he was presumed dead and that he had only been abroad for a matter of weeks. 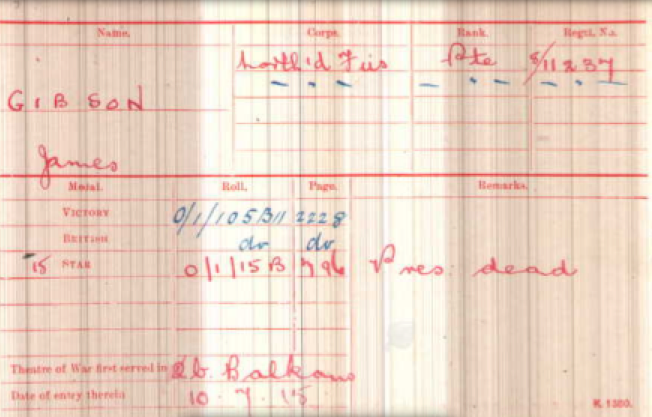 The War Diaries for his regiment (accessed on the ancestry website) show that they sailed from Liverpool on the Aquitania on 3rd July 1915 having arrived by train from Milford the previous day. They were attacked by an enemy submarine the following day, A torpedo was fired but it missed.  They landed at Mudros Bay on the Island of Lemnos in the Aegean Sea. On the 18th July they sailed to Kephalos camp on the island of Lemnos. They then were sent to Suvla Bay on the 19th August in Gallipoli where James was killed. Here is the entry for 19th August and the preceding few days.

His mother and two married sisters were beneficiaries.

He is remembered on the Helles Memorial in Turkey.

On one of her forays in Cumnock New Cemetery, Cumnock History Group member Morag Gordon spotted this memorial to Corporal Tom Dunsmore erected by his comrades. He doesn't feature on the War Memorial so more investigation required. 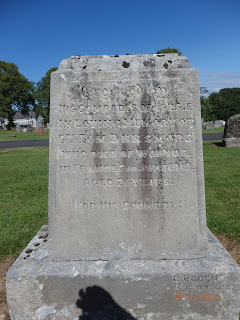 He was in the 1st/5th Battalion of the RSF as were many local men, my late father-in-law included.

He was born in Muirkirk about 1896 to William and Annie Dunsmore of 40 Springhill Terrace, Muirkirk.

He died of wounds in 57th Clearing Station in France on 2nd June 1918.

He had brothers William and Joseph and a sister Marion who all received a share of his war gratuity along with his father.

His CWGC record tells us he is buried in Aubigny Communal Cemetery Extension in France.

He is also remembered on a gravestone in Sorn Cemetery erected by Bill Harrison of Sorn and Indiana in memory of his family and three war buddies.

He is on Muirkirk War Memorial.

Here's the family on Cumnock Connections tree. His father was born in Cumnock.

Posted by Kay McMeekin at 11:51 No comments: