James Campbell McGee was born in 1894 in Stevenson the son of Thomas McGee and Elizabeth Clawson.

The family moved to Cumnock about 1902 and father Thomas was a chimney sweep.

James was a sergeant in the RSF.

Posted by Kay McMeekin at 22:42 No comments: 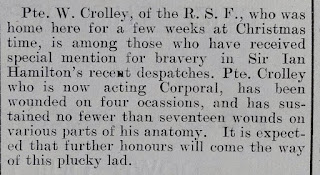 William Crolley or Crowley was born in Cumnock in 1877 and was the older brother of Maitland Crowley.

He was an 18 year old miner when he enlisted in the Royal Scots Fusiliers in May 1895. He had blue eyes and dark brown hair.  He was AWOL from barracks in Ayr  from 20th June 1895.


Cumnock Connections tree
Posted by Kay McMeekin at 22:40 No comments:

William James Dillon was born in 1889 to forester Alexander Dillon and Annie Drury.


His older brother John Dillon served in the KOSB. Both survived.

Posted by Kay McMeekin at 16:32 No comments:

When war broke out he re-enlisted immediately on 20th August 1914. He was at the upper age limit of 41. He was now a postman. His address was 28 Glaisnock St.

He was 5ft 8 had grey eyes and light brown hair. He served at home for 329 days before he was discharged as no longer fit to serve.

He died in Holmhead Hospital, Cumnock on 26 March  1958. He was 85 and a retired postman.  His usual address was Kilwining Rd. Irvine. The informant was a nephew A W MacMillan.

Just 2 weeks ago we had a message on our Facebook Cumnock Family History Group from a chap Tom Inglis in Saltcoats, North Ayrshire. He had found Harry's Cumnock Parish Medal

Tom wanted to return it to a family member. 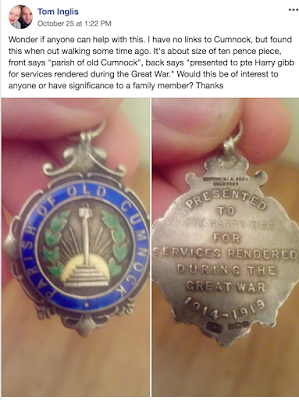 We already had Harry on our big Cumnock  connections tree of 35,000 names. Although he was married he had no children. We traced his siblings’ descendants and found that the grandson of Harry’s sister Janet was still living in the area. One of our members knew him and a quick phone call confirmed he was Harry Gibb’s great nephew.

Tom Inglis has posted the medal from Saltcoats and we were delighted to return Harry's medal to  William Neal  99 years on at the Welcome Home Tea Dance on the 10th November 2018 in Cumnock Town Hall as part of our Cumnock Armistice Events.

Posted by Kay McMeekin at 09:53 No comments: 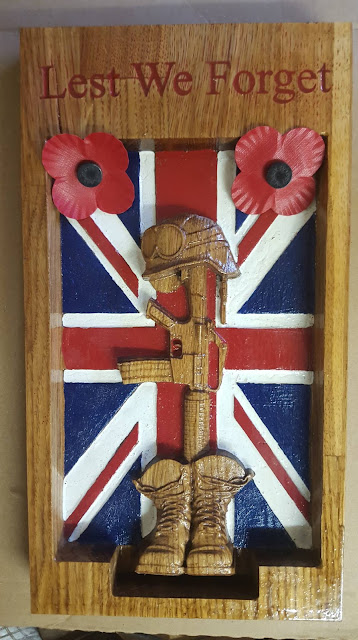 Made in Cumnock by John White
Posted by Kay McMeekin at 12:13 1 comment:

Email ThisBlogThis!Share to TwitterShare to FacebookShare to Pinterest
Labels: art, Lest we forget

Letters from the Front 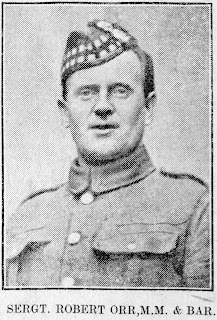 Dear Robert
Just a few lines to say I am well, hoping you are all the same. I was expecting to write sooner but Robert it is better later than never. We come out of the trenches tomorrow night. We have been in for seventeen days so I think we deserve a rest. We have had a good few casualties since we came in. Big Robert Gilmour got wounded on Saturday so I heard last night he was dead.  It was hard lines in how it happened. This is the worst turn we have had yet, Rab. You are speaking to a mate just now and the next thing you hear he is either wounded or killed as it were. Their few lines they are shelling our boys pretty heavy up the trenches. They killed one of our captains and wounded another in B Company. You know Robert, when they are doing that to us we are laying in to them too. All the Cumnock boys is getting on fine except that about poor Rab Gilmour. Big Hugh Lorimer[1] was taken away badly (next page)

this week to the hospital. I don’t know what is wrong with him. I fell in with Commie[2] just before  we came to the trenches. He is getting on all right. He was telling me the trenches we left was where poor Wull Lamont[3] was killed. I was expecting to meet poor Wull out here. How is their ones getting on? I was always expecting to drop Mrs Lamont a few lines but Robert you feel seeing how she is left as she was a cheery one but there are many left in the same footing through this B war. The week before we came into the trenches we was out on a working party making a new trench and we was just lousing[4] when they sent over two whizz bangs[5] killing one and wounded other three beside me. You would be fexed[6] for the one that was killed. He left six of a family. He was a Glasgow man.

I see our boys is getting it pretty rough at the Dardanelles. That is where your good brother is at. How is the Jims getting on? Have you him ever down, tell him I was asking for him. I wish to God, Rab, it was all over and us all back home again but we will have to beat them. I see our 7th Battalion is out here; that is Doc Murray and Jock Logan’s[7] lot. I would like fine to meet them. I see the Cumnock boys is going to have a good team this year. How is all the Townhead ones getting on? Tell them I was asking for them and also William Anderson and hope he won the Cairnhill cup. I wish I was going with him again to play at Kilmaurs the same as last season. I think I will close. Sending you my best wishes from your old pal R Orr
turn over
Tell the wife and the boys I was asking for them and also the old man and your good sister. I was to tell you that Duncan Ferguson[8] was asking for you he has a rare[9] job now.[10] He does not seem to go much to the trenches.

Dear Robert
Just a few lines to say that I am well glad to hear you are all the same. I received your parcel all right, Robert, and it was a welcome one and I don’t know how to thank you for it. Well, we are out of the trenches a week now for a rest and we was needing it as we was in for seventeen days so it is a pretty good spell and never having your boots off.
We lost big Robert Gilmour[11] that time. It was hard lines in how he got it he was out in a reconnoitring patrol and was returning  back in to the trenches again when they got the word “halt” so they answered, “C Company” but the fellow that was on sentry had lost his head and fired. It struck Gilmour and wounded the man behind him on the arm. Poor Robert got a hard one. It struck him on the chin. He never spoke after it but was conscious all the time and lived for four days after it. He shaked hands with the Cumnock ones before he left for he knew he was (next page) dying. He was the best shot in the battalion and was sergeant of our platoon. He was one of the gamest men in the company. There was some bits of the trench that was pretty tight and he came of[12] their back and walk it when he was going out of the trench to the hospital.
Big Hugh Lorimer went out of the trenches to the hospital badly. It is blood poison in the arm. He was pretty bad. I don’t know how he is keeping.
I see you have got a good team this year again. We have a big game here tomorrow. Robert, when we are out of the trenches you would think there is no war going on at all. I think we was lucky that was sent out here as the boys is catching it at the Dardanelles but they will not be long with the Turks. How is your good Brother getting on? He will have seen many a sad sight. Well Robert we will have to beat them. When we was in the trench the last time we knew Warsaw had fell as the Germans cheered for about one hour and they gave us some rapid fire and rifle grenades, but we laid into them too.
How is the Jims getting on? I hope he is keeping out of big Jimmie rode.[13] Tell him I was asking for him. How is his Brother Tom? How is the boys getting on?  Is Robert away to the school yet? Tell your ones I was asking for them and also tell Wm Anderson sorry about him losing in the finals but better luck next time.  I see James McCall[14] gone and  got married. Have you had a crack[15] with him yet? Jimmie has seen a good bit of this. He deserves a rest. I think this is all at present. from your old pal Ticky.