He married Mary Kelly on New Year's Day in 1909 in Girvan when he was a baker's van driver and sailed to  St John New Brunswick, Canada on 2 March 1912 on the Saturnia. He was a van man planning to take up farming.

With war looming he returned to Ayrshire in August 1914 on the Letitia. He was an engine driver.

He enlisted in the Ayrshire Yeomanry in 12 October 1914.

Adam Begg served in the Ayrshire Yeomanry, which landed at Helles Bay in Gallipoli on 11 October 1915, some time after the disastrous initial landings in April. His service record shows that he was discharged because of 'wounds' on 10 April 1916. 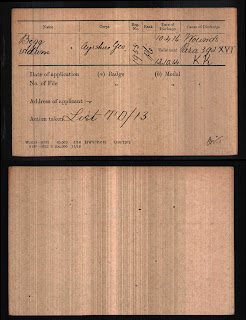 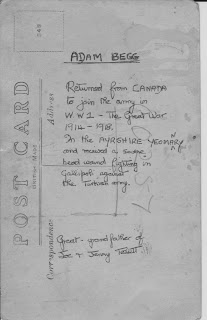 Posted by Kay McMeekin at 17:28 No comments: