I found this clipping in the Cumnock Chronicle of 3 May 1918 and spent some hours trying to work out who these people were. 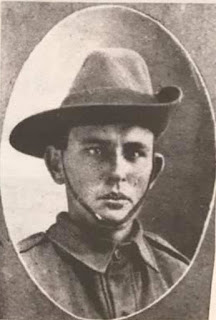 It was easy enough to find the fallen soldier using cwgc.org though his full name is William John Girvan.  He died on 2nd April 1918. There was further helpful information on his parents (John and Mary) and his birthplace and his age, 25. I looked for him on ancestry and found his birth.

Strangely there is a William John Girvan living in Waterside Place in 1881 (where Mrs John Cree is in 1918) but he is much older and the family seems to have gone on to Canada. So that seem to be a coincidence.

Now to look at Mrs John Cree in Waterside Place. There are 2 John Crees in the 1911 census in Cumnock and neither is in Waterside Place. John Cree a baker married Mary Catherine Peden of Ochiltree. Her mother Annie I can see in the censuses was born in Lamlash. This rang a bell as I had seen an Annie Allan born in Lamlash, already a sister of Mary Allan. Yes, her mother is Annie McCulloch Allan (named after James Allan's mother)  so Mary Catherine Peden  is the cousin of Corporal John Girvan.

The Chronicle has him as John Girvan. His family say he was known as Jack. 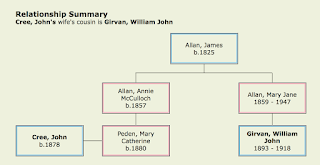 Allan family on the tree

His service record (74 pages) can be downloaded.  Click on View Digital Copy top right.  He enlisted on 1 March 1915 and his occupation was a labourer, He had trained as a barber for a year. He was 5 ft 5 and a half inches tall, had dark hair and eyes. He had been wounded three times previously, shot in the head, ear and leg. . After one of these hospital stays in England he was on furlough in January 1017 which is probably when he visited Cumnock. He served first in the Dardanelles and then France. He was promoted to Corporal on 5th June 1917.  He was badly wounded on 1st April with gunshot would to thighs causing a fracture and arm and back in Belgium. He died at the 5th Australian Field Ambulance the following day. (This doesn't quite tally with the newspaper report above). There is correspondence with his mother regarding his medals and war grave. All very sad reading.

Update 22 April 2018: The family in Australia has been in contact and have been to his graveside on the centenary of his death.

Great great grand nephew Malcolm Maurer writes:
Last night as we arrived in Brisbane, soil from William's grave was declared and treated with nothing less than honour and respect by Australian Customs.

In France Rod, Vanessa and I joined Meredith and Erin, touring the Western Front  as we prepared for the 100th anniversary of William's death.

Nothing could prepare me for the overwhelming emotion of the magnitude of sacrifices for our freedom.

Walking through fields in No Man's Land and finding live ammunition and items of war 100 years after thousands of men on both sides died in so many fields.

We walked as close as possible the final steps of William, as we made our way to his grave. Locating the clearing station that he was treated in before he died.

Arriving at Pont-D'Achelles Military Cemetery, I new where William was as I walked up the steps entering the cemetery.

I walked every row reading each name, then I stopped, paused and continued as I read William's headstone. Returning to his grave once I read each headstone.

Given to us by our tour guide, I read the attached for the first time at his grave.

As each family member removed soil from his grave, we replaced it with flowering plants including a poppy.

A small gesture to reunite a mother and son, the soil will be interned into his mother's grave at a later date.

It was overwhelming knowing that in spirit he was home in Australia. 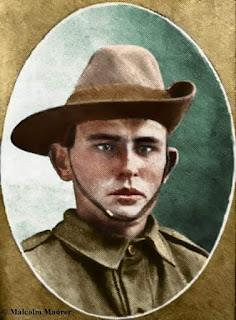 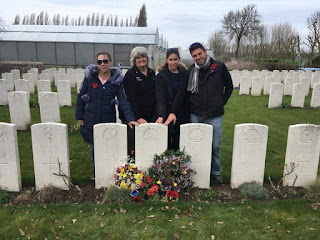 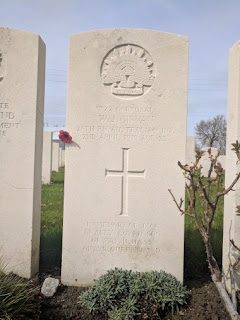 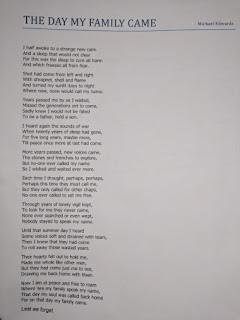 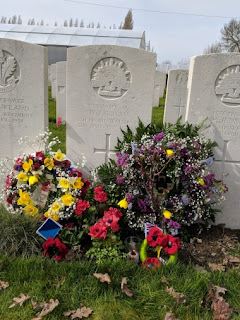 Previously the plan to visit was published in the Cumnock Chronicle in May 2017 in which we get a mention. 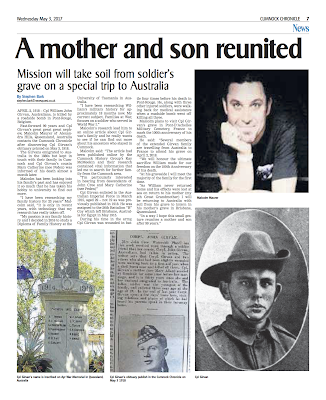