Posted by Kay McMeekin at 22:43 No comments:

David Crichton McCulloch was born in Cronberry, Lugar on 14 March 1896 the son of colliery manager Thomas McCulloch and his wife Helen Crichton. He enlisted in the ASC and was killed accidentally in London on Sunday  5 September 1915 while riding on a tramcar in Brentford High Street.  He was 19. He had spotted some comrades passing in a lorry and had leaned out to wave to them when he was struck by a tram going the other way. Death was instantaneous.

HIs father had to go to London to identify the body and he was brought back to be buried in Auchinleck Cemetery on the following Thursday.

He is on Auchinleck War Memorial

Posted by Kay McMeekin at 09:27 No comments:

Unusually he died in Italy on 7 Dec 1918.  This from https://awayfromthewesternfront.org 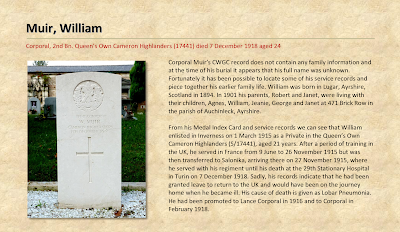 On Cumnock Connections tree
Posted by Kay McMeekin at 11:25 No comments: