Woolf Slonimsky was born in Main St, Glasgow on 18th November 1894 to Joel Slonimsky and his wife Lena Dunetz. Joel was living in Cumnock at the time and soon the whole family was settled there where the parents had fled from Slonim in Belarus in 1888.

Father Joel built up a very successful draper's business after starting as a travelling draper, going to door to door.

Woolf or William as he was known enlisted in the Royal Army Ordnance Corps, and was promoted to Corporal.
Regimental Number: O21544 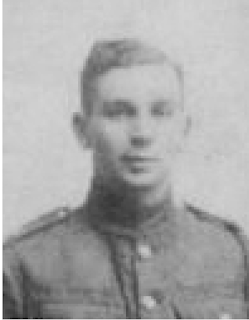 He survived the war and was involved in the family business in Ayr Road. They branched into furniture.

Much later perhaps in the 1930s the family adopted the name Sloane and the family continues to trade in Glaisnock Street.

Posted by Kay McMeekin at 20:39 No comments:

James Gourlay was born on 7th February  1898 in Glengyron Row to James Gourlay and Mary Nicol.
He had sisters Bridget and Sarah. His mother had died in 1903. He was only 19 when he died on 16th June 1917.  He won the Military Medal the previous year. His father latterly lived in Tower St, Cumnock. 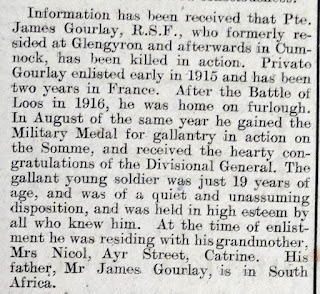 He is a cousin of John Nicol who also died.
Posted by Kay McMeekin at 20:05 No comments:

Thomas Baillie was born on 24 October 1890 at 463 Lugar to coal miner Thomas Baillie and his wife Martha Bradford. He was baptised in Lugar church on 4th March 1894 along with his older sisters Margaret and Mary.

He is remembered on Lugar War Memorial.

He was a player with Lugar Boswell

Posted by Kay McMeekin at 09:30 No comments:

enlisted at Ayr
next of kin father John
residence is Dunaskin


On Cumnock Connections tree
Posted by Kay McMeekin at 09:24 No comments:

Thomas McGee was born in 1871 in Johnstone, Renfrewshire and the family moved to Cumnock about 1901/2.

At the outset of WW1 he was recalled and served in France.

He worked latterly as a chimney sweep. He was also the Town Crier.

Both Tom and his sons James and Tom all served and came through WW1 but not without incident.

and this is the son

Posted by Kay McMeekin at 16:43 No comments:

William George Park was born in Cumnock in 1893 to miner James Park and Margaret Bicket. By WW1 the family had moved to Newtongrange, Midlothian. 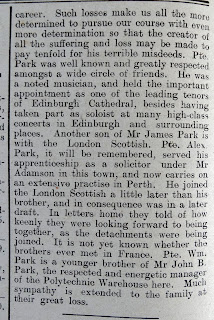 Posted by Kay McMeekin at 13:23 No comments:

His entry on CWGC

Posted by Kay McMeekin at 07:45 No comments:

James Miller was born on 30 Sep 1895 at Hillcrest in Maybole, the son of James Miller a draper and later Provost of Maybole and Maggie Nimmo. He died France and Flanders on 16 May 1917.

His grandfather also a James Miller was a mineral borer in Cumnock employing 18 men in 1881.

Posted by Kay McMeekin at 07:36 No comments:

Email ThisBlogThis!Share to TwitterShare to FacebookShare to Pinterest
Labels: James Miller, RE, The Fallen

The Great War and Cumnock

Cumnock was much smaller 100 years ago than it is now. None of the housing schemes existed. Landward communities such as Skares were big communities with miners' rows and farm workers cottages. Families were large, with as many as 13 children. People knew their neighbours, worked beside them and socialised with them.

At the outbreak of the Great War on 28 July 1914, the inhabitants of Cumnock went about their everyday business – there was no mention of the commencement of war in the Cumnock Chronicle. Like most places in Britain not much attention was paid to the war as people were told “… it will be all over by Christmas.”

This war was different from any previous war. It was warfare on an industrial scale with new weapons such as tanks, submarines, planes and chemical gas warfare. Eventually 32 countries took part and the losses were very high. Fighting took place in many places including France, Belgium, Serbia, Bulgaria, Turkey, Greece, Palestine and Egypt. The south east of England came under attack from ships and planes but the war didn’t impinge on Cumnock.

Many men in Cumnock were eager to volunteer for the armed forces. The 2 local regiments being the Royal Scots Fusiliers and Ayrshire Yeomanry, but many young men who were mostly single, miners or farm labourers enlisted in regiments from all over Scotland and further afield. Cumnock women were not far behind in signing up for war work, mainly with the Scottish Women’s Hospital, the Women’s Army Auxiliary Corps and the Voluntary Aid Detachment.

By February 1916 when the grim reality of the war hit home, Britain was so short of soldiers that conscription was introduced. Some professions were exempt such as clergymen and teachers. Reserved occupations included miners but many had already volunteered. Enlistees had to be 19 to be sent to fight abroad but many signed up at a younger age and were put into training only to be sent abroad as soon as they were old enough.

At home women and men organised support for the war effort through fundraising at flag days, concerts, bazaars etc. Work Parties were formed and these knitted ‘comforts’ - socks, hats, scarves and gloves which were sent to the front. At Christmas they made up gift boxes with a variety of practical items including food and cigarettes. There were donations of eggs from local farms to go to wounded soldiers in hospitals. There were shortages of food at home with German submarines sinking ships bringing vital supplies - times were hard both at home and on the front.

Families were informed of the loss of a son by a telegram followed by a letter from the commanding officer and maybe from comrades or other local men in the same regiment. In many cases, men were blown to bits and no body was found. In some cases it might be a year before they were officially listed as dead, a time of anguish for families who hoped against hope that their man had escaped or had been taken prisoner. Few families in Cumnock escaped losing a family member or a neighbour in the war.

Not all those who died were shot or blown up. Many died of illnesses such as dysentery, malaria, fevers, pneumonia, illnesses that are now treatable with modern drugs such as antibiotics. Many of those who survived bore the scars, mental and physical for the rest of their lives. Many lost limbs, were blinded or suffered from what we now call post-traumatic stress disorder or PTSD.

Scotland’s contribution to the British Armed Forces was considerable with the country sending over 690,000 men to war. World War One would last 1,566 days and would take over eight and a half million lives.

By the time the armistice was signed in November 1918 estimates for Scotland conclude that 74,000 never returned home, either killed in action or succumbing to disease, while a further 150,000 were seriously wounded. The impact of this devastating loss of life was felt the length and breadth of the country, and today almost every village and town in Scotland has its own memorial to those who died. It is difficult nowadays to realise what this meant for families living in Cumnock where 662 Cumnock men enlisted and 117 never came home.

Germany had formally surrendered on November 11 1918, and all nations had agreed to stop fighting while the terms of peace were negotiated. After the armistice there was still sporadic fighting and it took a year for some men to get home. On June 28 1919, Germany and the Allied Nations, including Britain, France, Italy and Russia, signed the Treaty of Versailles, formally ending the war.

A Welcome Home Dance took place in Cumnock Town Hall on 10th December 1919 to which all returning solders and their wives were invited. They were presented with the Cumnock Parish Medal made of enamelled silver with their names inscribed. The families of men who had fallen were awarded a medal with a different inscription. 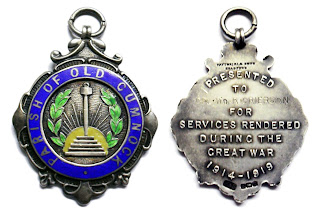 The War Memorial with 117 names was erected in the new cemetery in Glaisnock Street in 1921.
Posted by Kay McMeekin at 06:39 No comments:

Email ThisBlogThis!Share to TwitterShare to FacebookShare to Pinterest
Labels: impact, The Great War and Cumnock

Hugh Woodburn Guthrie was born in Cumnock in 1898 to John Guthrie and Elizabeth McTaggart  but by 1901 the family was in Glasgow.

His parents predeceased him and his effects went to his sister Mary, Mrs Thomas McGeoch.


Further information by courtesy of Bobby Guthrie February 2020.
By 1887 his father John Guthrie is living at Barrhill Road, as a coal miner. in 1891 the family is in Greenock where he works as an assurance agent. The family returns to Barrhill Road, working as a life assurance agent. It is here Hugh Woodburn Guthrie is born. In 1901 census the family are living in Kelvinside, Milton, Glasgow with John working as boot shoe traveller. He dies the following year at that address, a Draper traveller. His wife Elizabeth dies in 1906, Garscube road, Glasgow.
Hugh Woodburn Guthrie is now orphaned aged 8 years old. In the 1911 census he and a sister are living at Govanhill, Glasgow with his older brother John and his wife. John is a baker (he was born at Townhead, Cumnock 1883) John is at Govanhill in the 1915 and 1920 Valuation rolls. Hugh's sister Mary (born Waterside Place, Cumnock) married Thomas McGeoch. The couple are living at Govanhill with brother Robert (born Barrhill, 1887) as a boarder. It was Mary that got Hugh's effects following his death at Flanders 1918. I wonder if he was the living with his sister when he signed up?
Posted by Kay McMeekin at 16:38 No comments:

Henry was  born in Lugar in 1886, the son of Henry Kinnear a baker and his wife Margaret Forrest.

In 1901 he was a grocer's assistant living with his parents at 91 and 92 Back Row Lugar but he is not with his parents in 1911 in Lugar or anywhere else  in Scotland in 1911. Presumably he has gone to South Africa.

He is remembered on Lugar War Memorial although no Kinnears are still there post war.
Posted by Kay McMeekin at 16:38 No comments:

Niven Withers was born in 1891 in Kirkcolm, Wigtownshire. By the start of WW1 he was in Mossblown.

He was discharged from the army on health grounds in August 1917. His acute nephritis was attributed to his active service in France, exposure and stress.

He married Sarah Campbell in 1918

He died in hospital in 1926 age 35 of diabetes mellitus. His usual address was 3 New Bridge St Cumnock.

Posted by Kay McMeekin at 16:37 No comments:

Thomas Boyd Connell was the son of David Connell the printer in Cumnock and his wife Grace Bowman Brown. He was born on the 18th Feb 1892 in Cumnock.

He was in Strathcona, Alberta age 19 in 1911 census of Canada

He married Nellie Cliff in Medicine Hat in 1921 and by 1931 they had Helen,  David and George when they were home on a visit.

Findagrave
Posted by Kay McMeekin at 16:36 No comments:

Born in Kilmarnock about 1887 the son of Bernard Connor and Mary Orr, he was in Ayrshire Yeomanry and then the Highland Light Infantry

They family lived in Mauchline by 1891

Thomas had been employed on a fish van but was a chauffeur at the Dumfries Arms Garage when in went to war.

Captain Robert Edward Angus was born on the 27th May 1894 at Radcliffe in Northumberland.


"Best pilot in the squadron" 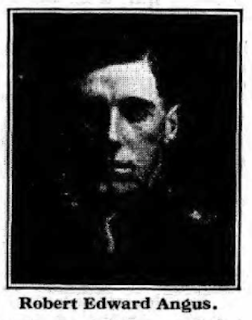 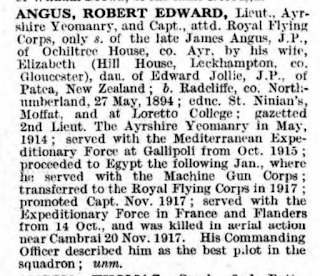 Son of James Angus and Elizabeth Angus, of Ochiltree, Ayrshire.
Posted by Kay McMeekin at 15:59 No comments: