John McKinnon was born in Cumnock about 1895 to John McKinnon a slater, plumber and gasfitter and his wife Jemima.

In 1901 the family was at Hayfield Cottage in Cumnock.


John was a Lance Corporal in The Royal Engineers and was killed in France on 4th November 1918, so close to the Armistice. He is buried at the ORS British Cemetery in France. He was 23.

His father was deceased and his mother living by this time at 2 Alexandra Terrace, Ayr.

He was awarded the Military Medal in 1918.

His name is on the Cumnock War Memorial.

His record on CWGC

The family on Cumnock Connections tree

It's possible that the 3 young lads are John McKinnon senior's 3 sons, making the lad on the right John. 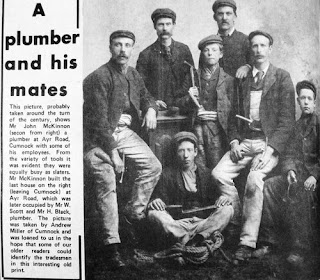