Robert Dunlop Goldie was born on 4 May 1887 in Cumnock, the son of John Goldie the draper's in the Square.

He graduated as a doctor (MB) from Glasgow University in 1908.

He was a Captain in the RAMC

In 1916  he was awarded the Medal of Honour from the Mayor of Corbie in France for devotion to duty regarding contagious diseases in and around Corbie.

After the war he emigrated to Corrimal then Wollongong, New South Wales, Australia where he worked as a doctor.

His death was reported in the
Illawarra Daily Mercury (Wollongong, NSW) in the edition of 3rd March 1952, accessed via Trove

Posted by Kay McMeekin at 22:31 No comments:

David Arthur was a saddler born in Cumnock in 1871.

He married widow Eliza Cockcroft in 1899 in Leeds.

He had previously served 4 years in the Royal Scots Fusiliers when he signed up for the Yeomanry in 1914. He was 43 which was unusually old for a volunteer.  He was 5 ft 4 with grey eyes and brown hair. He was promoted to sergeant.

However was invalided out of the army in 1916. His address on his pension record was 91 South Harbour St., Ayr.

He died at 29 New Street in Riccarton on 1 November 1918 of phtisus pulmonalis (TB) according to his death certificate. 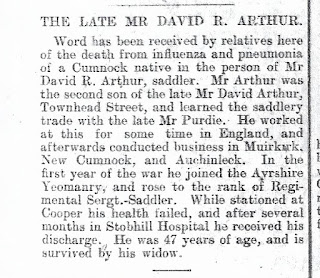 Cumnock Connections tree
Posted by Kay McMeekin at 10:25 No comments:

John was born in Cumnock in 1873 and was employed in the Post Office. His service record survives. He enlisted in the Royal Engineers as a telegraphist.  He was 44 years old when he enlisted in July 1918 which was considerably older than average. He was a gifted telegraphist. His address was Pitlochry Cottage in Glaisnock Street. He was married to Agnes Dow and had several children.

His brother Alexander Kerr  Samson also enlisted in the Royal Engineers (No. 420406)  in 1915.  His service papers survive. Born in Cumnock in 1881 he was 34 and a booking clerk for SW Railway , living at 7 Montgomery Street in Irvine.  He married Susan Ward in Irvine in January 1916. He sailed to France from Southampton in October 1916.  He had 8 days in hospital in 1918.  He was awarded the Good Conduct Badge in March 1918. He was variously described as very good, proficient and skilled as a clerk. His pay doubled from 6d (sixpence)  a day to a shilling when he passed a proficiency test.

Their brother Robert Richmond Samson was also  in the Royal Engineers.
Happily all three survived the war.

Posted by Kay McMeekin at 13:36 No comments: